Today on the Nindies Showcase Video – Spring 2018, it was announced that LUMINES REMASTERED is coming to Nintendo Switch in May 2018. The game also heads to PlayStation 4, Xbox One and Steam. Press release below.

LUMINES REMASTERED Heads to Nintendo Switch™,  PlayStation®4, Xbox One and Steam in May 2018

Tokyo, Japan/San Diego, Calif. (March 20, 2018) — Enhance, the acclaimed game publisher/studio known for audiovisual experiences such as Rez Infinite, has announced LUMINES REMASTERED—a multi-platform release for Nintendo Switch, PlayStation 4, Xbox One, and Steam. The game is an HD remake of the original Lumines (pronounced “lou-min-es”) that debuted in 2004 as a PlayStation Portable (PSP™) launch title. Earning high praise and awards, it remained the top-rated title on the platform for four years and continued on to establish an action-puzzle series loved by millions of players. This is the franchise’s debut on a Nintendo console.

Developed by Japanese studio Resonair, LUMINES REMASTERED brings minimalism to the puzzle genre where the fusion of light and sound sets the stage for a two-color falling block experience playable on-the-go on Nintendo Switch or at home in 4K on PC and consoles. Groove to electronic jams while strategically dropping blocks before the BPM bar sweeps combos clean after each measure. It’s a stylish game perfect to play anywhere or at anytime.

LUMINES REMASTERED will be available digitally on Nintendo Switch, PlayStation 4, Xbox One, and Steam in May 2018. For more information on the title, visit luminesremastered.com.

For the latest news on Enhance, visit: 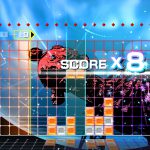 Lumines Remastered Announced, Shinin’ Brighter Than Ever on PS4News